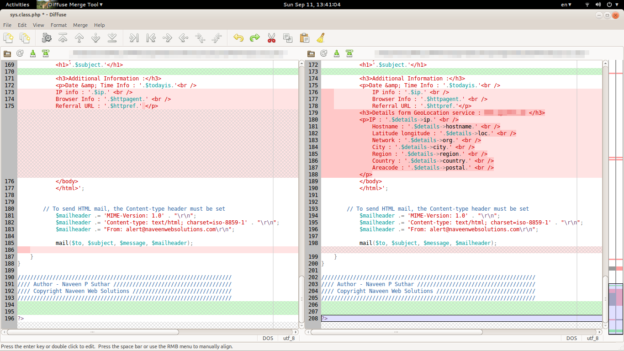 Canadian developer Derrick Moser began work on Diffuse about four years ago while doing experimental development. For tasks in which lots of editing was necessary he found existing merge tools painful to use. He wrote the first version of Diffuse in C++, the language with which he was most familiar, but after a long break he switched to Python to address several usability issues.

Developers frequently need to compare source code in two or more versions of a program, or in different programs, when maintaining software or integrating their work with that of others. Diffuse lets users edit the files being compared and save changed versions of checked-out working copies. This reduces barriers to experimental development, as users can easily discard portions their work that led to a dead end. Diffuse also has built-in support for several popular open source version control systems.

File Permissions
Every file on the system has associated with it a set of permissions. Permissions tell UNIX what can be done with that file and by whom. There are three things you can (or can’t) do with a given file:

This means that the execute bit should be cleared (-) for all users. (owner, group and the rest of the world) The permissions start with a letter specifying what users should be affected by the change, this might be any of the following:

So, 755 is a terse way to say ‘I don’t mind if other people read or run this file, but only I should be able to modify it’ and 777 means ‘everyone has full access to this file’

Here are some useful and helpful commands which is generally used in day to day workings on the Linux system. Following commands were tested on the Ubuntu/Debian Linux.

Open help and options info of a command
$ man <command>

Make ISO of A Directory
An ISO of a directory containing files and sub-directories can be made using this command.
mkisofs -o image.iso -R /path/to/folder/